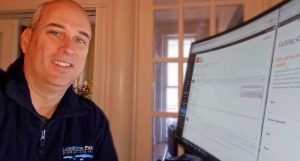 I originally pointed my ship in the direction of classical music.  After high school I earned money for college as principal horn of the 98th Army Band at Fort Rucker.  After a short stint as a classical composition major at ODU I was accepted into the North Carolina School of the Arts music program as a French horn performance major.  While attending school there I was hired as the Associate Principal Horn for the Winston-Salem Symphony.  During these years I toured nationally as a horn soloist under the patronage of Affiliate Artists and the NEA.

Upon Graduating from UNCSA, Francesca and I got married and brought our two children into the world.  I gave up the classical scene to stay home as a full-time dad.  As they grew and went on to school I found myself with time on my hands once again so I founded Leadmine Pond Productions, Inc. in 1997 as a recording studio.  In the process of making recordings for various local musicians, I programmed a website for my new company.  This was the first academic and professional step into cyberspace, a world I continue to explore today.  As a classical musician the importance of understanding one's place in the orchestra is very similar to understanding a website's place on the internet.  In 2001 Leadmine Pond Productions, Inc. became incorporated as a full-time web development company.

I continue to focus on improving my business daily, balancing service to my customers with ongoing research.  For years I have been a student of several internet-related languages and platforms including WordPress, PHP, JavaScript, JQuery, SQL, MySQL, CSS, HTML, ColdFusion, ActionScript among others.